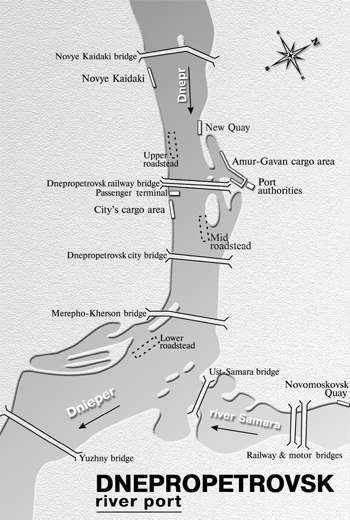 In the center of Ukraine, 393 km from the mouth of the Dnepr river, it is situated the city of Dnepropetrovsk, which was called Yekaterinoslav until 1926. The city was founded in 1776, two years later, in 1798, the quay was completed. This part of the River Dnepr was a key section of the ancient route from the Varangians (Norsemen ie Vikings) to the Greeks'.

The development of the city and its rail and water transport activities sprang up in the 1880s. At present, there are about 150 various industrial enterprises in Dnepropetrovsk of different branches like metallurgy, metal processing, tool making, machine building and power engineering; chemical, light, construction and food industries. Also there is the flagman of missilery, Yuzhmash Rocket Plant.

Today Dnepropetrovsk has one of Ukraine's largest river ports. Thanks to its favorable geographical position, it fully meets the demands of the adjacent industrial regions for transport, storage and handling of various cargoes, e.g.: metal, grain, coal, containers, etc. For the countries on the Danube, Black Sea and Mediterranean Sea, the river port is well-known as a foreign trade transshipment point.

The port is situated 393 km away from the Dnepr's mouth, and has two major cargo areas on both banks. The City's integrated cargo area is on the right bank; upstream its affiliate Novye Kaidaki lies. The passenger quays are near the City cargo area.

The Amur-Gavan cargo area is situated on the left bank of Kirov backwater, upstream from which there is a Novy quay.

On the 28th km from the river Samara's mouth coming into the Dnepr, there is the port operated Novomoskovsk Quay.

In cold season easterly winds prevail in the port; in the warmer periods northwesterly and northerly winds prevail. On an average, there are 13–20 days a year with strong winds. The annual number of misty days varies from 43 to 71. In winter months, on an average 7–13 misty days a month are observed; in the summertime mists are observed not every year. From October to March mists last on an average 8 hrs a day and 3.6 hrs a day in the warmer season. The navigable period lasts 9–9.5 months a year on an average. The icy season lasts on an average 71 day a year. The ice is 5–30 cm thick. Icebreaking pilotage is available at the beginning of icy season (December) and at the end of it (March).

Entering and leaving formalities for the ships passing from the river to the sea and back are performed by the State Port Control Inspection of Kherson River Port. A shipmaster should inform the Port Operator about the arrival over VHF radio, and he should fulfil all the instructions given by the operator. Navigation safety control in the port is performed by State Navigation Control Inspection (SNCI) of Dnepropetrovsky branch.

The port is open for entry during the navigable period and when the Dnepropetrovsk reservoir water level is normal (51.4 m) to vessels and convoys of vessels with the draught 3.75 m in fresh water. If the overall dimensions of a vessel going to berth in Amur-Gavan, Novy Berth or Novy Kaidaki is more than 8 m high, their shipowners or agent must arrange in advance with the railway the date and time for raising the rail bridge, and pay for it before hand.

Pilotage is not compulsory for the vessels whose captains have certificates of competence for working on the river and have passed the regular attestation in the SNCI. For other ships the pilotage is compulsory. The shipmaster submits his request for a pilot to SNCI 48 hours before the maneuvers begin via the 5th channel VHF, Kama radio or by phones: +380 (562) 339785, 342472, (056)7215291 on weekdays from 8.30 a.m. to 5.30 p.m.

The port's territory comprises 2 cargo areas. The total length of berths is 2,250 m.

Loading of vessels at the elevated conveying complex is performed by 2 conveyer belt lines from railway wagons and motor vehicles by direct variant. The intensity is up to 400 t per hour.

The port put into operation the second line of the grain berth for loading grain from wagons and road vehicles by direct scheme. Total capacity is 400 t per hour.

There are 6 non-self propelled ships of total cargo capacity of 7,000 t to accumulate grain cargo.

There are 7 passenger terminals of 164 m total length in the port. Passenger vessels of passenger capacity of 700 people can be accommodated there.

The berth is intended to handle grain cargo from rail wagons and motor cars via overpass conveyor line on ships of river – sea type with ships carrying capacity of up to 5,000 t. Side trucks, single ones and those with trailers, are discharged by unloader Y15-URAG of 35 t l/c and RAZ-65 of 50 т l/c. Method of ship's loading: simultaneous grain discharge by gravity from two wagons and/or trucks through discharge hatches into receiving hopper, then on sloping conveyor to turning loading device with moving tripper, carrying out even ship's loading. Number of wagons per one marshalling of trucks is 14, time of vessels handling is 20–25 hours.

The nearest ports are: Zaporozhye, 86 km away; and Dneprodzerzhinsk, 39 km away.

There can be formed a train of carrying capacity of 6,000 t to deliver cargo to the ports of the Danube and the Dnepr with further cargo transshipment by port floating crane on seagoing vessels in the sea ports of Nikolaev, Yuzhniy and others for the countries of Europe, Asia, Africa and America. There is the passenger fleet in the port to operate on local lines.