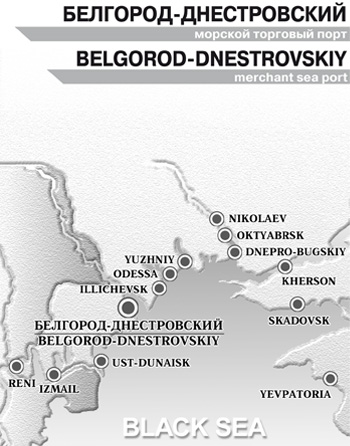 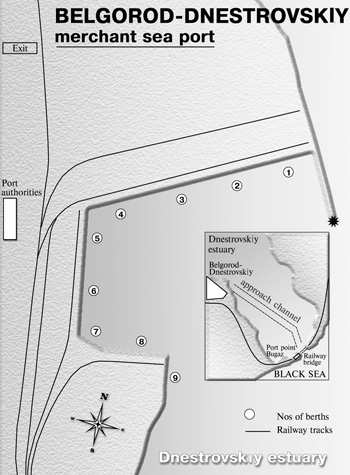 Belgorod-Dnestrovsky is one of the oldest cities in Ukraine. The Greek settlement of Tyras was founded here in the 5-th century B. C.

The Romans renamed the city as Albajulia. Slavonic tribes conquered it in the 9-th century and named it Bely gorod (the White City). The Genovese ruled it for a short time and built a fortress here that was later considerably enlarged by the Turks. Today this fortress is one of the main local sights. Turkey held the city from 1497 to 1812, but being defeated in the Russian Turkish War, was obliged to give it back to the Russian Empire.

After World War I the city was annexed by Romania but retaken by the USSR in 1940.

Today it is a town in Odessa region in Ukraine. Its population is 57,000 people.

Among big industrial enterprises of the city, there are the milling plant, the medical equipment factory, etc.

Owing to Belgorod-Dnestrovsky's favorable position, in 1971 a merchant sea port was opened here. Its main objective in the system of Ukrainian ports is to serve cargo flows of the Black Sea and Mediterranean regions.

The port also includes the port point Bugaz located right in the mouth of the Dnestr River before the railway bridge.

Belgorod-Dnestrovsky is in the southwestern part of Odessa region at the distance of 20 km from the Black Sea on the left bank of Dnestrovskiy liman that has 42 km of length and 4.5 – 12 km of width. The liman is linked by the channel with the Black Sea. The distance between Odessa and the town amounts to 80 km. All connections of the town are provided by road, railway and water transport. Freeways Odessa - Izmail, Odessa - Reni and also the main rail line Odessa – Izmail are running through Belgorod-Dnestrovsky.

Vessels should approach the port via the 2.22 km. long sea channel and then along the 14.5 km long estuary channel. The depth of the approach channel is 4.5 m.

The port is open for navigation all year round. During the cold season northeasterly and northerly winds prevail. In the warm season, southeasterly, southerly and northwesterly winds prevail. Strong winds of 15 m/s or more occur from 7 to 30 days a year. Average annual temperature is +8.8 to +11.5 °C. Fogs are observed 31 days a year, on an average, and mostly from October till March. Frosts occur from November till March.

When en route to the port and no later than 48 hours prior to arrival, shipmasters shall notify and inform the port's Chief Operator and Agent of the vessel's ETA, name, flag, overall length, breadth, draft, maximum mast height if the ship is in ballast, types and quantity of cargoes and about bunkering, water and other supplies needed. ETA shall be confirmed again 24 and 4 hours prior to arrival.

The port can accommodate ships with draft less than 4.3 m and of maximum 140 m in length. Vessel height, from water line up to mast top, must not exceed 28 m.

Ships approach the port via the Dnestrovskiy Estuary channel and follow on through the approach channel of the Dnestrovsko-Tsaregradskiy mouth. Across the mouth, there is a railway bridge with vertical lift span whose maximum lift is 28 m above water level (the estuary's water level can vary within ±0.5 m). Shipmasters must reach agreement with the Port Operator and Port State Control Inspection on when their ship is to pass under this bridge. Leaving and entering the port are carried out 24 hours a day in accordance with the schedule of the drawbridge. While navigating the channel, ships' speed should not exceed 7 knots.

Pilotage is compulsory when ships approach, enter and leave the port, as well as by mooring operations. A agent shall order a pilot by SE "Delta-Pilot" no less than 4 hours prior to the time pilotage is required. A pilot usually boards and leaves a vessel at reception buoy No. 1 situated 1.5 miles east of the Dnestrovsko-Tsaregradskiy Lighthouse.

When entering and leaving Belgorod-Dnestrovsky Port, tug operation is compulsory.

The port's outer roadstead, which has depths up to 12 m, is situated 0.5 miles northeast of the reception buoy. Its holding ground is good. No more than one vessel at a time may anchor within port waters.

The frontier post operates 24 hours a day. Customhouse and executive department work 24 hours a day, other services from 8 a.m. till 5 p.m.

The lion share of the cargo flow of Belgorod-Dnestrovsky Merchant Sea Port is the export one destined for Turkey and countries of the Mediterranean.

The port is able to handle around 1 million t. of cargo.

The territory of Belgorod-Dnestrovsky Port covers 59.04 ha, 21.57 of which are deposited territory. The territory of port point Bugaz covers 5.371 ha. There are 10 berths in the port with an overall length of 1.23 km and with depths at berths of not less than 4.3 m. The port can handle up to 100 loaded wagons per day. Loading and discharging can be carried out both on direct scheme (ship to wagon or wagon to ship) and via cargo storage areas. To transfer grain the following facilities are used:

The cargo is transferred as follows:

There is 6 open warehouses in the port covering totally 95,695 m2. The port has also seven barges to store grain. Their total lifting capacity amounts to 7,000 t.

The Belgorod-Dnestrovsky Port's park of gantry cranes comprises 19 units. There are also 2 mobile loaders Atlas there. The port is about to purchase Sen Nebogen crane positioner with the lifting capacity of 57 t.

Port Point Bugaz is situated 14 km south of the port, on the mouth of the Dnestrovskiy Estuary.

The nearest ports and the distance to them in miles: