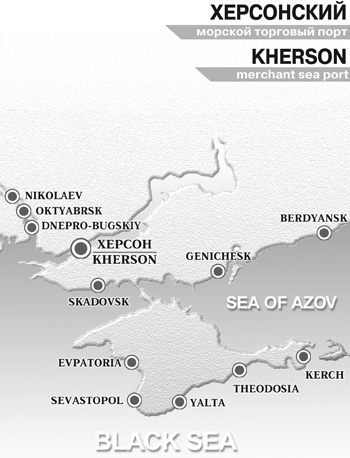 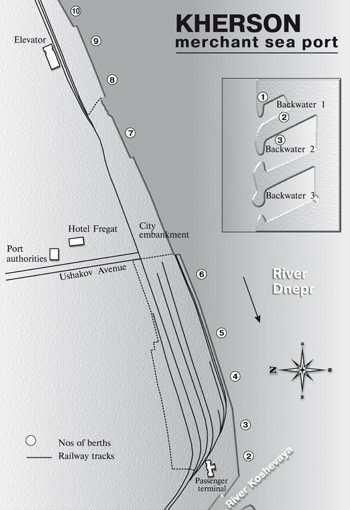 The city of Kherson was founded in 1778.

In 1803 Kherson started developing as a merchant port. In 1806 the government assigned the means to build a shipyard, which annually launched from 20 to 30 merchant vessels. Economic needs of the city were growing simultaneously with the drift of labour, increase of population and construction volume.

In 1901, after thirty years of interrupt caused by dredging works on the Dnepr's riverbed, the city's seagate was opened again. Kherson engaged the glory of one of the most important ports exporting grain.

After World War II Kherson became an industrial, agricultural and cultural center in the south of Ukraine. Equipped with modern facil-ities, Kherson Merchant Sea Port was reputed as one of the leading ones in the Black Sea region and bulked large in USSR foreign trade.

For the time being Kherson Merchant Sea Port is a modern enterprise rendering high quality services on handling and transporting cargoes, providing safe navigation and state supervision concerning navigational safety and works on rating and certification.

Kherson port is situated 15.0 km from the mouth of the river Dnepr on its right bank and is approached by going up the fairway of the Rvach river, up the Dnepr's Olkhovy arm, and the Dnepr itself.

The port is navigable year-round.

The Dneprovskiy estuary is declared a national reserve. Navigation is permitted only along its navigable arms. Navigation along the fairway leading into the port presents no big difficulties. In winter, when the Dnepr freezes over, vessels are led into the port by icebreakers.

Kherson port's roadstead is in the Dnepr between the upper roads for river-going vessels 1 km upstream from the elevator and the meridian of the eastern extremity of Maly Potemkin Island.

Kherson port is open to vessels of any flag year round, and can admit vessels of up to 200 m in length and 7.6 m draft, in fresh waters.

All navigation and maneuvers in the port are regulated by the Harbour Master. No vessel is allowed to enter or leave port, nor take up or change berth without the permission of SPCI.

Within port waters no ship, except hydrofoil vessels, may navigate at speeds over 6 knots. When navigating port waters, vessels coming within 500 m of a backwaters 1, 2 and 3 must sound one continuous signal, intensify the watch, keep to the middle of the river, and pass the backwater exits with particular care, bearing in mind that at any moment a vessel may exit a backwater and cross the vessel's path.

The assistance of tugs at Kherson port is compulsory for mooring operations. Number and capacity of tugs shall be determined by port pilot in agreement with shipmaster.

A tug is called for via the port's operator on duty. The towage of vessels with crews on board must be supervised by their shipmaster.

Handling of vessels in Kherson port shall be carried out under agreements made with cargo owners or their forwarders.

Cargo owners or their forwarders, in accordance with these contracts, must submit to port authorities the applications for handling the vessel no less than 6 days before the appointed month.

Vessels are not allowed to change its mooring place in the port without permission of the Operator on Duty or SPCI inspector.

The port is designed to handle 4 million t of cargo a year. The port handles general and dry bulk cargoes: more than 40 % of cargoes handled in the port are mineral fertilizers and chemicals in bulk and in bales, about 40 % – grain. In the port they handle also all kinds of ferrous metal, pig iron in ingots, coke, ferrous alloys, timber, peat, etc.

There is one cargo handling area in Kherson Sea Port for handling general and bulk cargoes. Its berthing line runs 1,262 m.

The grain terminal is situated here. It includes a warehouse (cap. 20,000 t). Grain from railcars and motor vehicles is discharged into special bins, and then goes to the warehouse via the conveyor. A direct scheme of grain handling is also envisaged.

There is a special device to parcel fertilizers into 50 kg bags. The capacity of this device is 750 t per day. The bags are packed into soft containers, placing up to 2 t of cargo.

Other bulk cargoes are packed in the port too, round timber is packaged, etc.