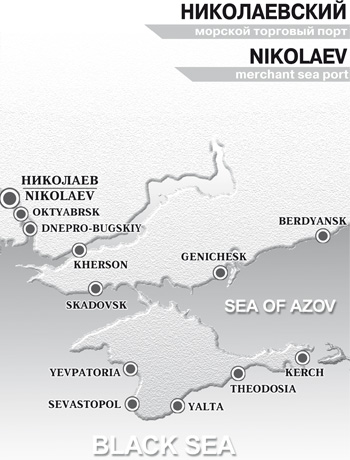 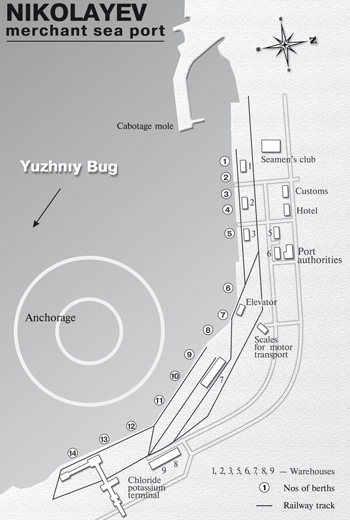 Nikolaev is situated on the left bank of Bugskiy Liman (estuary) of the Black Sea where the Yuzhniy Bug and the Ingul River join. The population of the city over 500 thousand people.

On the 1-st of July 1862 the commercial port was opened to accommodate foreign ships with establishing of the first class customs house, and the city was opened for the foreigners to arrive and live there. Nikolaev has great transport potential, due to the availability of sea ports and terminals, a handy railway junction, two airports.

Some international transport corridors (ITC) are running through Nikolaev:

The article is written on the basis of the Mandatory Regulations issued for Nikolaev Merchant Sea Port with (changes and additions) and customs code of Nikolaev port.

Nikolaev port is navigable all year round. The water in the liman is fresh.

In the cold period of the year, from November till April, N, NE, W, NW winds prevail, and from April till October, NE, S, SE winds do. The average monthly wind speed is 3–6 mps. In the cold period wind speed of 15 mps and more tend to prevail. In the warm period the winds' direction is marked by twenty four hour circulation, which makes for stable wind breezes, i.e. southerly during the day and northerly winds at night.

Fogs are mostly observed from October till March, with the average monthly number of foggy days ranging from 4 till 12.

Visibility in port's approach channels and waters extends to 5–10 miles and more.

Nikolaev port's waters are not protected from winds – that is why small vessels cannot take shelter in them – so, in case of S, SW, SE winds, masters of such vessels must take the necessary precautions.

In icy periods icebreaker assistance is performed by port's tugs.

Nikolaev port is equipped with all means of communication.

The shipmaster or agent must inform Nikolaev port's authorities of ETA 10 days prior to arrival and follow up with exact information 72, 24 and 4 hours prior to the arrival.

Detailed approach information should include:

Prior notification of sanitary or any other restrictions (if any), preventing normal handling of the ship in port is also mandatory.

Besides the documentation stipulated in the General Rules for Outward Formalities, shipmasters shall submit the following to Port State Control Inspection: the executive cargo plan, scheme of deck cargo securing and stability calculations in view of arrival at and departure from the destination.

Nikolaev port's waters and Bugsko-Dneprovsko-Limanskiy Channel are passable for ships up to 215 m in length, up to 30 m in width and loaded draft up to 10.3 m. Exceptions to these dimensions can be determined by the Harbour Master, case by case. Large vessels navigating in the channel shall keep to their starboard side.

Vessels should pass each other port to port. Ships navigating in the approach channel shall exhibit the following signals, which must be visible over the whole horizon:

Small tonnage vessels shall give way to vessels exhibiting the signals. Ships with these signals have precedence over other large vessels and they regulate the order, in which ships pass through BDLC. A ship leaving the port has precedence over another one in the equivalent position.

All tugs, both sailing alone and in convoy, as well as smallsize vessels with draft up to 4 m in full load, when passing largesize vessels shall sail out beyond the channel's edge – except in bends 2, 3, and 4 of BDLC.

The overtaking of one largesize vessel by another is prohibited in the channel – except in cases when it is necessary to avoid emergency situations.

Pilotage in Nikolaev port water, by mooring operations in the port and at the handling terminals, as well as by vessels anchoring on the port's roadsteads is compulsory and is performed exclusively by the state sea pilots of SE Delta-Pilot.

Tug assistance is compulsory for ships of more than 187 m in length while passing port's water area. The tug service can be rendered at shipmaster's or his agent's request dispatched to the tugs owner, which is allowed to work in port's water area accordingly to the agreement made with the port. Tugs can also serve a small-size vessel at the shipmaster's request.

There are two anchorages in the inner roadstead of Nikolaev sea port – Western and Eastern ones.

The leading line of Siversovo Konstantinovskiy lighthouse serves as the dividing line. The Eastern road is intended for anchorage of large tonnage and deep draft vessels, the Western road is for small tonnage vessels.

A ship's towing and mooring operations in the port with port tug assistance are accomplished under command of the towed ship's Master regardless of whether the ship is proceeding under her own power or not. Mooring operations are not allowed when wind speed is 15 mps or more. From the moment of announcement of the ice period, all maneuvers and mooring operations in the port may be carried out only by Harbour Master's permission if a pilot is on board. Ship navigation through BDLC is performed with icebreaker assistance in convoy or with supply tug assistance. Ships with corresponding ice class may navigate in ice without any escorting, with the Harbour Master's permission.

Request for icebreaker assistance must be submitted 24 hours prior to expected arrival or departure.

Special fueling and refueling vehicles carry out liquid fuel bunkering in the port or at a handling terminal. It is performed near all berths in concurrence with the State Ecological Inspection of the northwestern region of the Black Sea and with port's Fire Department permission.

The following kinds of cargo can be handled in Nikolaev port:

On April 24, 2009 the company MOREPRODUCT Ltd put into service the distribution cold-storage warehouse for storage of deep-frozen products, which is unique on the territory of CIS-countries. To handle vessels, they use port's berths Nos. 3, 4. The throughput capacity of the terminal totals 500,000 t per year. The number of employees – 50 people. 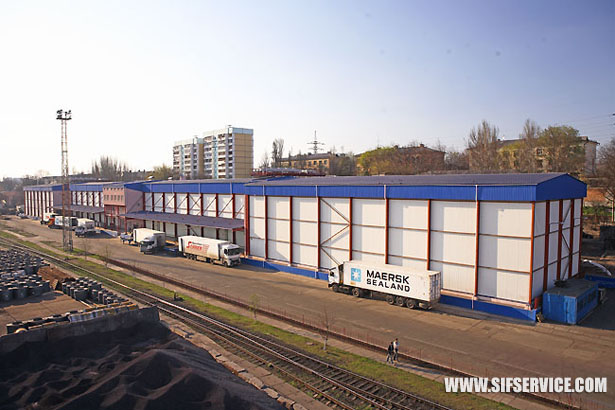 Complex for chipping of timber

On June 26, 2009, the company ICL Ukraine Ltd put into operation a complex for timber chipping. The complex was built with the assistance of Italian loan capital. The complex is situated at port's berths Nos. 11, 12. The capacity of the complex totals 420,000 t per year. The number of employees amounts to 70 people. 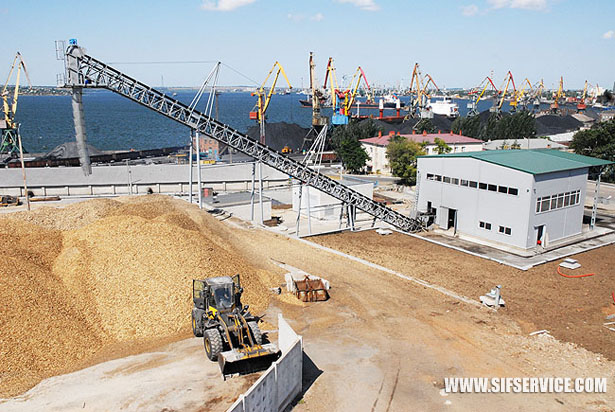 Multipurpose handling complex on berth No. 8

The main objective of this multipurpose handling complex creation is to provide loading and unloading, storage and shipment of various export and import cargoes. The complex has the following technical data: the length of berth No. 8 totals 200 m, that of auxiliary berth – 71.5 m, the junction sector with berth No. 7 is 27.0 m length, depth at the quay wall – 11.2 (the engineering design of the berth is calculated to allow future deepening to 11.5 m). The structure represents a bulwark made of metal cleat PU-32, load class 1 according to TSRR, equipment – 3 gantry cranes of 40 t l\c each. The estimated average cargo turnover amounts to 1 million t annually, maximal – 1.3 million t. On implementation of this investment project on berth No. 8 there will be 129 new jobs created.

Grain handling complex in the rearward of berths Nos. 13, 14

The one-use storage capacities total 150,000 t. The expected annual throughput capacity of the complex averages 3 million t of grain cargoes. Number of employees – 180. Number of new jobs created – 42. The complex is going to be put into operation in 2010. The facilities of the existing complex that was taken on lease are reconstructed at investors' cost. The investor is building single-handed modern reservoirs to accumulate grain cargoes on the leased site.

This complex is a specialized terminal for handling of liquid petroleum products and provides their acceptance, storage and shipment. It is planned to handle several types of petroleum products: residual fuel oil, diesel fuel. The length of berth No. 15 is 230 m, depth at the quay wall – 11.2 m. The cargo turnover of the complex will amount to 4 million t of cargo annually.

For the reason of potassium fertilizers supplies termination, the administration of the port learnt in details the existing market of the cargo flows and made a decision to re-orientate the specialized complex for handling of grain cargoes (wheat, malt, maize, legumes, etc.), in order to prevent the facilities' downtime.

The complex enables handling up to 2 million t of grain annually on direct variant and is equipped with all-weather bunkers, a station for unloading of wagons, conveyor belt lines. Loading machines provide for high intensity of large bulk carriers loading. Sheltered warehouses give the opportunity to store up to 12,000 t and 18,000 t (warehouse No. 1, 2 respectively) of grain to accumulate shipload lots.

To carry out loading/unloading operations, Nikolaev port applies rates by piece in accordance with the 'Reference Book of Tariffs for Works referred to cargo handling in the ports of Ukraine' approved by the Order of the Ministry of Transport of Ukraine (with amendments).

Services, which are not indicated by the 'Reference Book of Tariffs', are paid in accordance with 'free tariffs'.