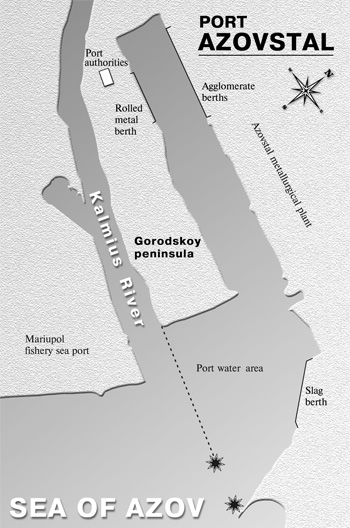 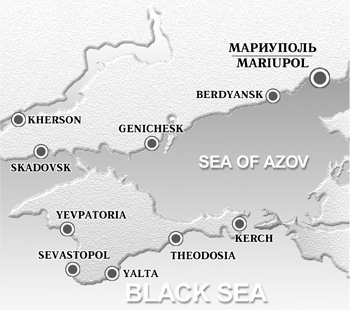 The "Azovstal" Metallurgical Plant was built in Mariupol in 1933, at the place where the Kalmius River flows into the Sea of Azov. Port waters were formed artificially; the dredging had been performed between 1932 and 1935. At first, the port specialized in handling hot agglomerate (the raw material for producing cast iron) from Kerch. Special ships were built for that purpose.

The agglomerate berths of "Azovstal& were operative until 1994, when production in Kerch was ceased. Nowadays the berhs have been decommissioned, agglomerate is transported by railway.

In the 80s two more berths were built, one for handling slag, the other for rolled metal, in order to transport the plant's production, mainly oversize plates, by sea.

In 1992 "Azovstal" port was opened to foreignvessels.

The Port Azovstal is a Sea Transport Department of the Joint Stock Company, "Azovstal" Metallurgical Plant.

The port's territory and waters are the part of JS "Azovstal" territory.

Only vessels of maximum 4.5 m draft and 200 m length are allowed into the "Azovstal" port's waters. Vessels exceeding this draft/length should consult the Harbour Master.

Pilotage is compulsory when entering/leaving port and by remooring. It is provided by SE Delta-Pilot pilots.

Shipmasters should order tugs no later than 40 min before entering "Azovstal" port and 30 min before sailing.

Port "Azovstal" charges are the same as the port dues in "Mariupol Merchant Sea Port".

While waiting for entering the port, ships can stay in its outer road at anchorage No. 458, or the one to the east of Mariupol Sea Port gate assigned to ships of max. 3.5 m draft.

The total port's throughput capacity is 1 million t. per year.

Because of the depth restrictions for heavy carriers, the plant's products (slabs, bars, rolled steel) can only be transported into the Black Sea and Mediterranean countries.

Cargo handling rates are used according to the standardsr of the Ministry of Transport of Ukraine.

Other Ports and Terminals