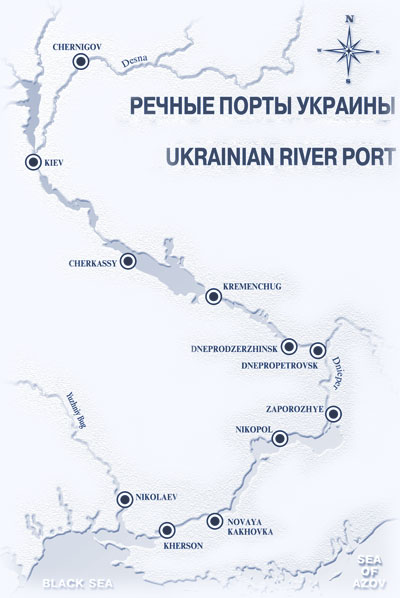 The Dnepr, which flows through Ukrainian territory, is the third largest river in Europe and, since ancient times, that has influenced the development of Ukrainian river navigation. There are numerous river ports and quays along the banks of the Dnepr and Yuzhniy Bug.

Eleven Ukrainian river ports, namely those of Chernigov, Kiev, Cherkassy, Dneprodzerzhinsk, Dnepropetrovsk, Zaporozhie, Kremenchug, Nikopol, Novaya Kakhovka, Kherson and Nikolaev, used to handle up to 100 million t of cargo annually, primarily mineral building materials, in USSR times. However, following the collapse of the USSR and the ensuing economic crisis, constructional activity was much reduced and the flight of river tonnage going off to seek work on the Danube led to an abrupt fall in cargo handling of these river ports, indeed putting some of them on the verge of survival.