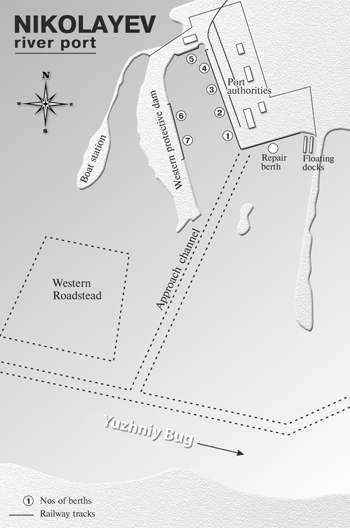 In 1882, the State Council of Russia passed a bill assigning funds for constructing a quay on the shoreline of the city of Nikolaev, historically, the establishment of Nikolaev River Port dates back to that event.

The basic construction works of the port were carried out from 1965 till 1969.

The article is written on the basis of the Mandatory Regulations issued for Nikolaev Merchant Sea Port and affirmed by Director General of Nikolaev MSP on 1.06.2009.

This area is situated in Nikolaev, on the left bank of a curve in the river Yuzhniy Bug, 40 km upstream from where the river falls into Dneprovskiy Liman. The port connects to the Black Sea via the Bugsko-Dneprovsko-Limanskiy Channel (for more detailed information see Nikolaev Merchant Sea Port). The distance from the channel's entrance to the port is 47 miles.

Nikolaev River Port is navigable all year round.

The port's river passenger terminal is situated within city limits, 8 km upstream from its cargo area, on the left bank of the Yuzhniy Bug River. The passenger terminal's position is: Latitude 46°58′36′′N, Longitude 31°57′54′′E.

A shipmaster or agent must report its ETA to the Harbour Master 72 hrs in advance and reconfirm it 48, 24 and 12 hrs prior to entry. They must also specify the ship owner, charterer, ETA at the pilotage station (reception buoy), the ship's draught, supply and servicing needs, as well as any sanitary or other circumstances impeding the vessel's readiness for handling.

Ships' outward formalities are conducted by an inspector in the office of DMSP port control.

Besides the standard documents, the shipmaster must submit a cargo plan, i.e. diagram of cargo securing with calculations of vessel's stability both at departure and arrival time.

Entry and departure of vessels to/from the port is carried out 24 hours a day subject to acceptable navigational and hydro-meteorological conditions but the movement along Spasskiy channel from the roadstead of SE NRP to the roadstead of SE NMSP at night is prohibited. Transit ships and local vessels must inform the Port Control and Port Operator on Duty of their intention to enter or depart from the port well in advance and obtain permission to pass through the approach channel. Only one way passage is permitted in the cargo area approach channel. Preference is given to vessels of 3.5 m draught or more, and when this parameter is equal to vessels leaving the port.

In the passenger area preference is given to transit passenger ships and, amongst them, to those leaving the port. Movement of vessel can be carried out only by permission of DMSP port control and a Port Operator on duty.

Vessels bound for Nikolaev River Port, after having passed from Nikolaev Sea Port waters and when navigating from the sea or pass-ing the Spasskiy channel's second bend, moving downstream, must ask the port control and a Port Operator on duty for permission to either enter the port or lay at anchorage in its roads.

Transit ships' departure is formalized onboard a vessel by a Port Control Officer on Duty.

Vessels' speed in port waters must not exceed 6 knots. Movement of vessels in port waters is prohibited when visibility is less than 500 m and/ or wind speed exceeds 13 mps.

Mooring operations by all vessels in the port (excluding river-sea ships with maneuvering device) must be performed by means of tugboats. Shipmasters should submit application for tug assistance to an Operator on Duty via UHF radio min. 2 hours in advance. Mooring operations are not performed when wind speed exceeds 13 mps.

Pilotage in port waters and by mooring operations is compulsory. Shipmasters must apply to the Port Operator or their agents for a pilot 12 hours in advance and reconfirm it 2 hours before, via UHF radio to a DMSP Port Control Officer on Duty and the area operator.

There are two outer roadsteads in the cargo area waters: Western and Eastern ones.

Eastern roadstead is to the right of the port approach channel axis, and it is divided into two parts by the first bend of Spasskiy Channel: northern and southern ones.

The northern part is assigned for lying of local non-self-propelled port fleet of up to 2 m draft.

The southern part is assigned for lying of one large tonnage vessel of up to 7.8 m draft and up to 185 m in length at anchors or roadstead mooring buoys.

In the southern part of port roadsteads it is possible to load vessels up to the draft of 8.5 m, and the vessels having that draft can leave the port if it is agreed with the Harbour Master on a case-by-case basis.

Anchorage No. 365, behind the left curve of the second bend of Spasskiy channel, is designed for vessels of up to 5 m draught.

The passenger area roadstead is situated behind the left curve of the fourth bend of Spassky channel.

The roadstead is assigned for anchorage of transit vessels and it can accommodate 2 vessels of up to 3 m draft and up to 110 m length.

Port self-propelled fuelers get berthed in the area of complex fleet service. Self-propelled purification plant is on the same berth.

Oil carriers can anchor in port roads when this is agreed with a Duty Inspector of DMSP Port Control, Guard Service and a Port Operator.

Lying abreast in port is permitted for no more than two vessels of the same type, except bulk liquid carriers.

The distance between transit vessels lying at the berth must be no less than 10 m; similarly, for local vessels, no less than 5 m.

After ice conditions are declared, ships' traffic are subject to the Harbour Master's permission, and mooring operations to tug assistance; moving vessels not classified for ice conditions is prohibited.

For vessels in transit through port waters, shipmasters must apply to the Harbour Master as follows: those coming from the sea – 24 hours before reaching port waters – by radio; those lying in the port – 6 hours before departure – by written application.

The port has: a canteen, shop, medical clinic, and fitness and recreational center.

Nikolaev River Port has its own cargo area and passenger area.

The entire area of the port totals 56.62 hectares; that of passenger berths and terminal covers 1.72 ha. The overall length of the cargo area berths amounts to 919.1 м – with the bank protection of the backwater's face end, the berth in the urban settlement of Matveevka and the fecal birth (100+61.4+6.4).

Techniques have been developed for loading vessels of up to 7.8 m draught in the roads using barges with floating cranes.

The overall length of the crane rails is 1,258 m; a railroad branch is available.

Grain is delivered from all Ukrainian regions and is supplied to 20 countries of the world. The terminal is located on the berth No. 7 and on the shore strengthening of backwater butted adjoining berths Nos. 3, 6. Grain handling capacity is 10,000 t of grain a day.

There are two overpasses having capacity of 3,000 t a day each.

The terminal has sheltered warehouses for grain storage: