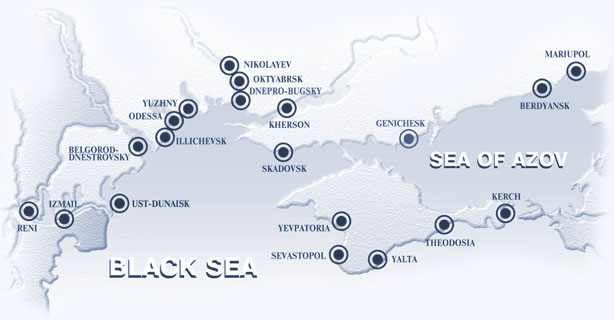 The waterfront and port territories are equipped with about 600 gantry cranes, thousands of lift trucks of different types and other units of port machinery. These ports have over 330,000 sq. m. of sheltered warehouses and over 2.5 million sq. m of open storage yards.

The most important Ukrainian ports are those of Odessa, Ilyichevsk and Yuzhniy, all situated not far from each other in the north-western part of the Black Sea. These three ports alone totally account for 56.6 % of the entire cargo turnover in Ukrainian merchant seaports and 38.28 % of cargo handling in all ports and terminals of the country. These ports offer the best approach ways (drafts of vessels accommodated are 11.5 – 14.5 m.). The other ports in Ukraine can only accommodate ships with considerably less draft.

The major container terminals in Ukraine are also located in the ports of Odessa, Ilyichevsk and Yuzhniy.

At the mouths of the largest Ukrainian rivers, the Dnepr and Yuzhniy Bug, there is another cluster of merchant seaports, namely Nikolaev, Kherson, Oktyabrsk, which handle both bulk and general cargoes.

Around the Crimean Peninsula's seacoast, there are the merchant sea ports of Yevpatoria, Sevastopol, Yalta, Theodosia and Kerch. They are destined primarily to serve Crimean transport needs. Given the Crimea's tourism potential.

On the northern coast of the Sea of Azov, there are Ukrainian merchant sea ports of Berdyansk and Mariupol, whose distinguishing feature is their closeness to the industrially developed regions of Donbass and Pridneprovye. The export of metals and other commodities from these regions provides the main workload for these two ports.

Since 2001, all merchant seaports of the country have been united in the established by them non-governmental organization UKPORT (Ukrainian Ports Association). The association comprises now also another ports, enterprises and companies, being one of the most authoritative non-profit establishments representing the interests of those engaged in the water transport industry of the country.