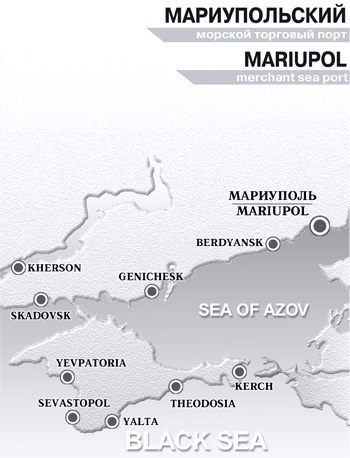 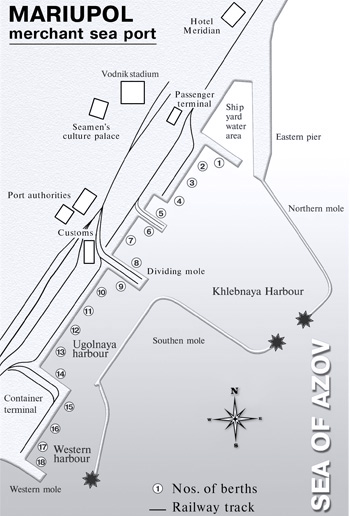 Mariupol is a city in Donetsk region, a big industrial center of Ukraine. The creation of Mariupol Port was the natural continuation in the impetuous industrial development of Southern Russia in the second half of the 19-th century. September 2, 1889, when 18 train cars loaded with coal first arrived onto its quay, is considered to be the date when port Mariupol operations began. In terms of volume of allocations, during the period of 1867–1904, Mariupol port occupied the third place among all ports of Russia.

The port is currently one of the leading Ukrainian ports and the biggest and most developed port in the Sea of Azov. The port is called 'Sea Gates of Donbass' by rights.

On land the port is situated 180 km away from the big industrial Russian city of Rostov situated on the crossroads of many transport routes. Russian cargo comprises the great amount of cargo turnover of Mariupol Port. Via the Volgo-Don Canal, the Mariinsk system, and the Belomor-Baltic Canal, the port is connected to all regions of Russia drawn to the Volga River, and thus also goes out to the Caspian, Baltic and White Seas.

Port is situated in the northwestern part of Taganrog Bay of the Sea of Azov, 14 miles away from the entry to the bay. Navigable period is all year round. However, for about 35 days a year on an average, ice pilotage is necessary for navigation. In winter easterly winds prevail and in summer westerly winds do. Fogs are observed on an average 44 days per year.

The inner road consists of the outer port and Ugolnaya, Western and Khlebnaya harbours.

VTS provides for safe navigation round the clock, maintains control over all ships traffic throughout port's water area of 12 miles range and provides radar assistance to vessels in approach channels when reduced visibility and icy conditions prevail.

The nearest sea ports are Berdyansk, Taganrog, Yeisk and Kerch.

When bounding for Mariupol port, after entering the Sea of Azov via the Kerch Strait or after leaving ports of Sea of Azov, shipmasters should inform Mariupol port's Harbour Master and Chief Operator about the vessel's ETA to light buoy No. 1 of Ugolnaya Harbour's approach channel. ETA there should be reconfirmed again 4 hours prior to arrival.

After entering VHF reception zone the shipmaster must contact the Port Operator on Duty on working channel No. 20, in order to obtain information concerning anchorage, mooring place, loading/unloading operations, etc.

Mariupol port can accommodate ships with a length of up to 250 m and draft up to 8 m. The average depth of approaches to the port is 8.6 m. Navigation can take place 24 hrs a day in the approach channels of Ugolnaya Harbour and Port Azovstal.

There is two way traffic. In cases when wind speed exceeds 14 m/s or visibility is less than 2miles, one traffic is announced in the approach channels.

Vessels with draft of 7.5 m or more, proceeding in Ugolnaya Harbour channel, are considered to be restricted by draft and should exhibit the signals specified by Rule 28 of the IRPCS-72. When passing such ships in the channel, other ships shall keep as closely to the starboard side of the channel as circumstances allow.

A ship's speed in approach channels should not exceed 8 knots.

The place of mooring is allocated by the Port Operator on Duty. Tug assistance by berthing operations is compulsory. When wind speed exceeds 14 m/s and more, mooring operations in the port are prohibited for transport vessels.

Pilotage is compulsory for all transport ships, exception is made only for: small fishing vessels, sports vessels and – in each separate case with Harbour Master's permission – vessels regularly calling at the port.

Orders for pilotage should be submitted along with the ship's information when approaching the port. Before leaving the port a pilot must be ordered at least 2 hours prior to full readiness of the ship for departure.

Anchorage area no. 458 is enclosed by the lines connecting the following points:

The area is for anchorage of sea – river type and oceangoing vessels of max. 5 m draft.

Area no. 457 is enclosed by the lines connecting the following points:

This area is suitable for anchoring see going ships with draft exceeding 5 m.

The area enclosed by the outer edges of the Southern and Eastern moles together with the line connecting the dike and Southern mole extremity, is used for temporary anchorage of small ships.

Sea–river going vessels and other vessels with draft not exceeding 3.5 m that are awaiting entry to either Mariupol Merchant Sea Port, port Azovstal or Mariupol Fishery Sea port, via the outer harbour (the old Gate), can lay at anchor east of port Azovstal's approach channel, to the right and left of the recommended route No. 32.

Ships are admitted into the port and moored to berths for cargo operations only. If, under certain circumstances and at the request of the shipmaster or shipowner, a ship is taken into port before cargo operations are to begin or stays in the port after they are completed, all expenses incurred for ship's shifting must be paid by the shipowner (see: Navigational Conditions). Oil carrying ships are put to the northern mole in the outer port.

Ships can only be supplied with technical and potable water.

Territory of Mariupol port covers 74.4 ha. The overall length of berths is 4.2 km. 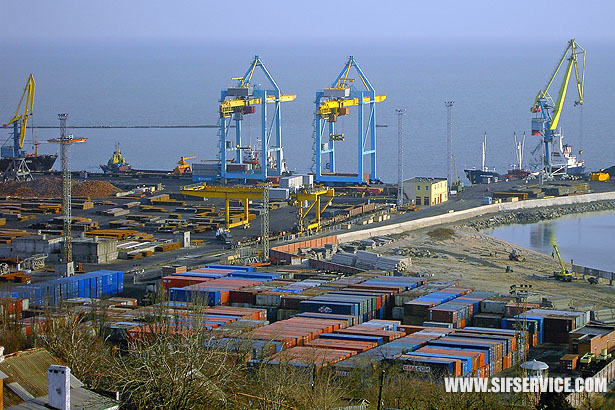 Mariupol port is able to handle petroleum products on the scheme board – board providing for ecological safety of these operations.

Unloading/loading of frozen cargoes, dangerous cargoes of corresponding classes and bulk fertilizers is carried out by direct scheme.

There is the motor depot in the port to carry out long distance and foreign road carriages.

There is the unit for thorough cleaning of ship's oily waters that makes it possible to treat up to 300 cu. m of waters daily providing designated level of cleaning.

Terminal turnover is 5 million t of coal a year.

Terminal provides highspeed handling and delivery of 20- and 40-foot containers 'from door to door'. Its capacity has reached 50,000 TEU a year.

There are 3 container loaders on the berth. 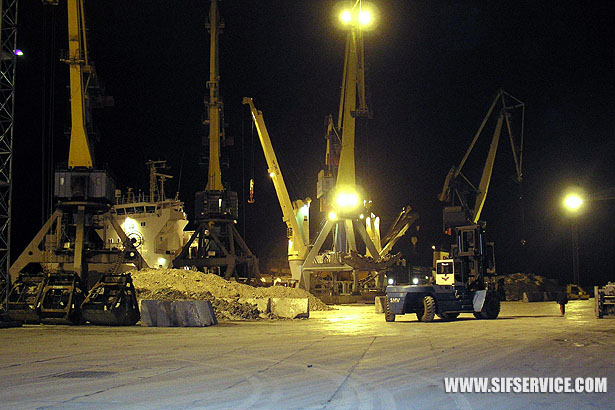 Clients can place orders to have cargo packed, certified and sorted out.

Mariupol port has at its disposal: