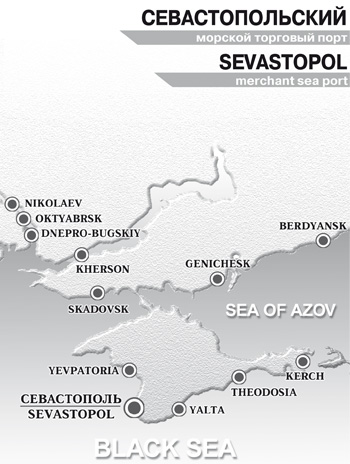 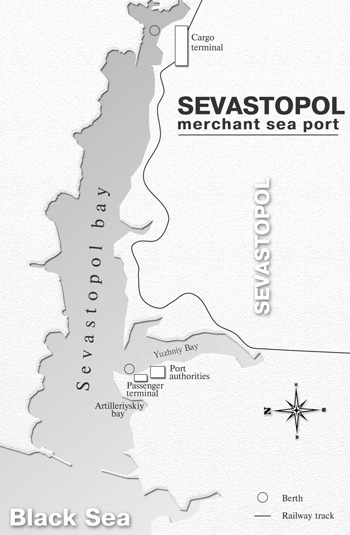 Sevastopol is a city in the Crimea, situated on the coast of Sevastopol Bay. In ancient times, just west of contemporary Sevastopol, stood the ancient Greek colony of Chersonesus founded in 421 BC. Those ruins are still extant.

Sevastopol was founded in 1783 as a naval outpost. The city became famous for its heroic defense in 1854–55 during the Crimean War, and also in 1941–42 during World War II.

In commemoration of those events, the Heroic Sevastopol Defense of 1854–55 panorama was built, as well as the Sapun Mountain Storming on May 7th, 1944, diorama.

The city’s main industries are shiprepairing, machine and instrument manufacturing, fishery and winemaking. The Ukrainian Academy of Southern Seas Biology and The Marine Observatory are also found here. The city’s population is over 300,000 people.

The port’s activities have developed in step with the city’s growth. In 1784 Empress Catherine II granted permission for free trade in Sevastopol. In 1863 the Sevastopol Customs House was opened. When in 1875 the railway was put into operation, Sevastopol was officially declared a trade exporting port. In 1884 the western part of the Southern Bay was granted to be used for construction of a merchant port (Tzarskaya Quay).

Sevastopol’s Black Sea Fleet naval base status limited the commercial development of the city. Until 1992 the port’s main activities were in the domains of passenger transportation, urban construction industry and the military industrial complex. Residential buildings and industrial enterprises are situated in the coastal bay area. That is why sea transportation is of vital importance for Sevastopol. In 1996 a Ukrainian state border post was established in Sevastopol Merchant Sea Port for international transportation, and foreign merchant ships were granted a right to call there.

It enabled to increase freight turnover, as well as accommodate foreign-flag cruise ships.

During summer navigable period cruise liners of river-sea type can enter the port: T.G. Shevchenko, Princessa Dnepra, General Lavrinenkov, Marshall Koshevoy, Zirka Dnepra, General Vatutin, as well as large-tonnage high-sides vessels of conventional volume from 50,000 to 95,000 cu. m, having the length from 180 m to 240 m – the vessels like Silver, Wistafjord or Europa class.

The article is written on the basis of the Mandatory Regulations issued for Sevastopol Sea Port, dated 6.10.2003.

The port is situated in Sevastopol Bay on the southwestern coast of the Crimean Peninsula.

The port is open to navigation all year round. The bay and surrounding sea waters have never been reported covered in ice. During the year northwesterly and northeasterly winds prevail. Fogs are most frequent in the springtime, especially April–May. Foggy day occurrence ranges from 11 to 25 days per year. On an average, a fog condition lasts about 4–5 hours.

Ukrainian Navy, the Black Sea Navy of Russia, Sea Merchant Port and Fishery Port are located in Sevastopol. Main facilities of the sea merchant port are in Sevastopol Bay and those of the fishery port are in Kamyshovaya Bay.

The territory of the merchant port includes:

Shipmasters of vessels bound for Sevastopol port, bights and berths located in the zone of port’s responsibility for navigational safety, as well as in the zone of Sevastopol Regional VTS Control, should submit their ETA information either by themselves or through their agents to the Port Operator (the copy is to be submitted to the Harbour Master and operators of the enterprises accommodating the vessels at berths). This must be done:

The shipmaster is responsible for preparation a vessel for seafaring. As for outward formalities, a vessel’s readiness for seafaring is checked by the State Port Control Inspection, Port Fire Service and Port Sanitary Quarantine Dept., usually 2–3 days prior to departure by order of the shipmaster or his agent.

By shirt-term (less than 6 hours) riding of a vessel in the port, the information of departure should be submitted no later than 3 hours prior to departure.

Departure is manifested within the period of 24-3 hours prior to departure and is valid within 24 hours.

All maneuvers in port are regulated. All civil ships may sail within the inner and outer roadsteads only with the permission of the Harbour Master according to demands of the Mandatory Regulations issued for SMSP.

When performing maneuvers in port waters, all vessels should observe the roadstead posts’ signals given from Konstantinovskiy fortification and Cape Nikolaevskiy. When signals prohibiting maneuvers are hoisted on these masts, the shipmasters should stop the engines, drop anchor or approach the berth, depending upon the situation. The lowering of the signal indicates that the prohibition has ended.

Pilotage in the water area is performed by state pilots of SE Delta-Pilot. The pilotage is compulsory for all vessels of no less than 40 m in length (no less than 500 brt) and foreign-flag vessels excl. small ones. Pilotage of any vessels is carried out by order of ship-owners, shipmasters and the agents.

The shipmasters of the vessels going from the port of Sevastopol towards Yalta port can order the pilotage along the route. The order is submitted to SA Delta-Pilot according to the established procedure. The pilotage on this route is non-mandatory, but in the cases appointed in items A and B of article No. 94 of Ukrainian Merchant Navigational Code.

The order for pilotage of arriving vessels should be submitted to the Port Operator and the Harbour Master no later than at 7 p.m. of the day prior to vessel’s arrival/departure and is specified 2 hours prior to the time appointed. If the order is not confirmed, it is cancelled and should be submitted again. A pilot boards a ship in accordance with the vessels traffic schedule of the day.

If there is the necessity to re-moor a vessel urgently, the order should be submitted 2 hours before re-mooring in working hours and 4 hours prior to the operation in non-working hours. The time-off is that on holidays and weekends, on Saturday and Monday, as well as on working days from 11 p.m. till 6 a.m.

By incurrence of circumstances putting in danger people’s life, vessel’s safety, as well as the safety of hydraulic structures or threatening the environment, the order for pilotage should be accepted immediately and a pilot must be heading to a vessel as soon as possible.

30 minutes prior to unmooring (raising an anchor) the shipmaster (ship’s agent) is to inform the Port Operator of the full readiness of the vessel for departure and the pilot’s embarkment. Without such confirmation a pilot will not carry out the pilotage.

Depending on sizes and vessel’s conditions, the pilot embarks a vessel in the five miles zone before the entrance into Sevastopol Bight, at anchorages or on the port’s roadstead. The pilot leaves the vessel at the point with coordinates: Latitude = 44’38,1’N, Longitude = 33’28,2’Е.

The point of embarkment can be changed as judged by navigational circumstances, weather conditions and the other considerations on agreement between the pilot and the shipmaster by permission of VTS Control and the shift captain of SPCI.

In the cases when sea roughness exceeds 4 balls (wave height over 2 m), the pilotage is carried out by leading the ship, and the embarkment (disembarkment) of the pilot is done on the inner roadstead, on the meridian of Matyushenko Bight.

The pilot having embarked the vessel and did not start operations within 15 min. for the reason that the vessel is not ready to be piloted, must inform the Port Operator and SPCI about that. On receiving the proper instruction of the Port Operator, he should wait for vessel’s readiness. If he is instructed to leave the vessel, the pilot should issue the bill of false call, and the vessel should line up to get the pilotage as the last one in the port.

Assistance by entering (leaving) the dock is an extra pilot operation based on the order submitted and is to be paid. The pilot does not carry out dock operation without being ordered.

Pilot’s delivery to Balaklava for embarkment the ship on the roadstead of Balaklavskaya Bight and back is performed by means of transport and water craft provided by the ship owner, shipmaster or the agent at their expense.

Pilotage is carried out 24 hours a day. In Balaklavskaya and Kazachya Bights, in the fluvial basin of Chernaya River the pilotage is performed in the daylight (from sunrise till sunset). At night the pilotage can be carried out by special permission of the Harbour Master.

Vessels can be supplied with fuel, water, provision.

The need for and the number of tugs necessary for ensuring safe pilotage and mooring (shifting, cast off) or towing operations are to be determined by the shipmaster and the pilot.

There are the following anchorages in the outer roadstead of Sevastopol port:

Coordinates of roadstead holding No. 1 in Sevastolopskaya Bight:

For vessels awaiting the permission to enter the port, there is the waiting area with no anchorage:

In the water area, there are the inner anchorages as follows:

The port has modern equipment, cargo handling facilities and machines that maintain handling of bulk cargo, scrap metals, timber, boxes and packages. These are the main freights in the port.

The port offers the following services:

Currently the main cargoes handled in the port are: coal, sand and timber.

There are two cargo handling complexes in the port – CHC-1 and CHC-2. The first one is specialized in handling sand and scrap metal. The other (CHC-2) – in handling coal (export and transit), export timber, sand, clinker and other cargoes.

The merchant port has two passenger berths, 200 and 135 m long, respectively, on the shoreline of the city center and the number of other passenger berths and jetties. The port carries out a great amount of passenger transportation in the harbours of Sevastopol.

The total cargo area covers 4.8 hectares. One third of this area is operative; while the rest of it will soon be. The berth is 112 m. in length.

Railways and highways are attached to the cargo area; the Inkerman1 station of Pridneprov-skaya railway has been registered in the international catalogue of port attached stations.

The port can offer: