Yalta is the tourist capital of the Crimea.

This city dates back to the middle of the 12th century, when it was known as Dzhalita. Besides its highly developed health resort industry (hotels, specialized sanatoriums, holiday hostels), Yalta is also famous for its winery, Massandra, residences of Russian Tsars and aristocracy, its unique Nikitsky Botanical Garden, the picturesque villa Swallow's Nest, etc. Yalta takes the first place in the Crimea as to the number of sights, and it is the recognized summer capital of Ukraine. Population of Big Yalta is approx. 200,000 people.

Being a state enterprise in the system of Ukrainian Ministry of Transport and Communications, the port performs its activity based on independent balance. In the centre of Yalta, there is the passenger complex of the port, the cargo-passenger complex is located eastward of Yalta, in Massandra. Port points and berths to serve passengers can be found in the other communities, from Foros to Sudak.

The article is based on the Mandatory Regulations issued for Yalta Merchant Sea Port dated 01.03.2005.

In the Port of Yalta navigable period is possible all year round, port waters do not freeze.

The passenger terminal water area is bounded by the eastern mole, by berths Nos. 3, 4, 5, 8 and 9, and by the line connecting the sea boundaries of the protective western and eastern moles. The port also includes a 50 m wide strip of sea adjoining berth No. 9.

Any ship entering or leaving the port of Yalta should have the permission of the Port Operator or the State Port Control Inspection Master on Duty.

The shipmaster should submit the following information to the port authorities:

Tanker's master should report his insurance police and spillage damage responsibility no later than 72 hours in advance.

While a large tonnage vessel is entering or leaving the port, any traffic of other ships is absolutely forbidden.

When the shipmaster notifies the port about ship's ETA, he should also order a pilot for entering the port. Before leaving the port, a pilot must be ordered at least 2 hours prior to full readiness of the ship for departure.

Pilotage in port Yalta is carried out 24 hours a day.

Pilotage in port Yalta is compulsory for: foreign cargo vessels regardless of their type and tonnage and Ukrainian vessels over 50 m. long that are not the property of Yalta port.

Tug assistance is compulsory for mooring operations of ships with a cargo capacity exceeding 500 GRT and with the length over 50 m.

Anchorage area No. 393 is bounded by the lines connecting the points with the following coordinates:

Incoming vessels, which have not obtained a berth or a pilot, shall anchor in the outer road in anchorage area No. 393. In all other cases it is prohibited to drop anchor in the port roadstead without special permission of the Harbour Master.

The port receives cruise vessels both at its berths and in the roadstead.

The passenger terminal can handle ships up to 293 m. in length (in favorable weather) and with draft up to 8.6 m. For passengers arriving on larger vessels, special port shuttle boat service is provided. 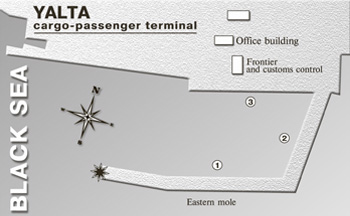 The cargo-passenger port point area has a berth equipped with cranes that have lifting capacities of 10–20 t and a berth for Ro-Ro vessels with aft ramp ferryboats of draft up to 6 m.

The port has three lift trucks of 5 t. l/c each.