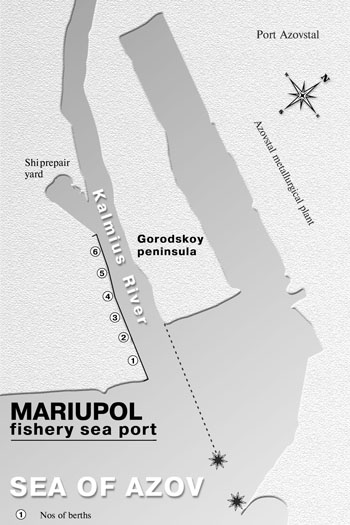 Mariupol Fishery Sea Port was founded in 1955 as a part of Mariupol Integrated Fishery Plant. After privatization of the fishery plant, the port became a new state-run enterprise. It is supervised by the Fisheries Department of the Ministry of Agriculture.

For a while the port was handling packaged cargoes: citrus fruit, tea and alcohol. But in 1996 cargo handling was stopped; one of the main reasons is that the port has failed to obtain international status, and thus, is unable to admit foreign vessels including those of CIS countries.

The port is situated on coast of Sea of Azov at the mouth of the Kalmius River, between Mariupol Sea Port and Azovstal Merchant Sea Port.

Only river stream with speeds of 0.5 – 1 mps is noticeable at the mouth of the Kalmius River. The port's water area does not freeze over and in winter vessels can approach and enter the port with icebreaker assistance.

Berdyansk Fishery Sea Port is a port point of Mariupol Fishery Port. Berdyansk port point is a port-shelter only, it does not have its own territory or waters; it is an auxiliary berth area of Berdyansk's Integrated Fishery Plant.

As dredging has not been performed for a long time (since 1985), the port cannot currently accommodate medium-tonnage vessels.

Mariupol Fishery Port's territory totals 1,25 ha. The port has 6 asphalted berths, four of which are operative. Handling operations must be performed by shipowners' own devices.