Member of Parliament David Makaryan wants to create half dozen of similar structures in regions instead of SE ‘Ukrainian Sea Ports Authority’ (SE ‘USPA’), each of which is easier to negotiate with local port operators. 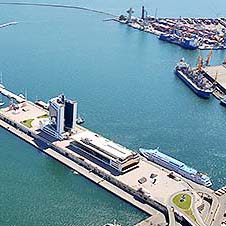 Member of Parliament David Makaryan wants to create half dozen of similar structures in regions instead of SE ‘Ukrainian Sea Ports Authority’ (SE ‘USPA’), each of which is easier to negotiate with local port operators.

In early February, Ukrainian Parliament has introduced draft of amendment to the Law "On Sea Ports of Ukraine" (the bill no. 2028). Authorship belongs to members of David Makaryan (block of Petr Poroshenko). He suggested that instead of a single state-owned company ‘Ukrainian Sea Port Authority’ in each port must be created their own separate administration with the status of state-owned enterprises. ‘In one enterprise, that is geographically remote from territories and water areas of 18 ports, made center of focuses both strategic and operational decisions... However, such a structural model of port management does not allow quick decisions locally and does not create favorable conditions for attract targeted private investment in port infrastructure’, - clarifies David Makaryan the needs to reform the system of ports management.

Creating of SE ‘Ukrainian Sea Ports Authority’ (SE ‘USPA’) in 2013 and transferring to its balance of strategic assets of Ukrainian ports (water areas, berths, hydraulic structures) with the deprivation ports by operator functions, is not entirely consistent with such concept. Private operators have repeatedly expressed the need for redistribution of functions between SE ‘USPA’ and its local branches. The elimination of centralized structure is not contrary to their main demand - the separation of operational and commercial activities and administrative functions at the ports.

Since Makaryan’s bill, in fact, offers to create a dozen of ports administrations in regions instead of one SE ‘USPA’ in Kiev, each of which will be easier to negotiate with local port operators. These include companies of both Ukrainian and foreign influential businesspersons, for example, Rinat Akhmetov (‘Portinvest’), Igor Kolomoisky (Odessa Oil Transshipment Complex), Oleg Nemirovsky (‘Brooklyn-Kiev’), Lakshmi Mittal (‘Nikmet-Terminal’). Therefore, the current bill is much more likely to be accepted, in contrast to its predecessor (no. 4431), which was promoted in last year by former chief of Ilichivsk seaport Yuri Kruk and ex-Prime Minister Anatoly Kinakh. He suggested the elimination of SE ‘Ukrainian Sea Ports Authority’ and the return of all its functions to ports locally, including operator functions, do not agree private stevedores with, as a result this initiative has been safely buried.