Ukraine has no plans to upgrade the rolling stock in 2015 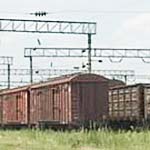 Ministry of Infrastructure of Ukraine has no plans to upgrade the railway rolling stock of the country in 2015. Such notification was received by PJSC ‘Kryukov Railway Car Building Works’ (KRCBW) to his appeal with a request to provide state orders.

This year does not include funds for the purchase of freight wagons. While it is assumed only buy diesel locomotive produced by ‘KRCBW’ amounting to 110 million USD, - stated in notification of Ministry.

KRCBW’s products are exported to over 20 countries worldwide.