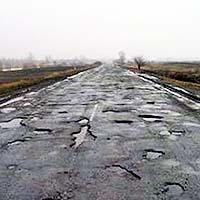 As for now, the territory of Ukraine has seven international and national transport corridors, which have a high index of transit, but the country does not use half of its own transport potential due to the poor state of roads.

Ukrainian roads density is 4.6 times lower than European average, but the real barrier to increasing the volume of transit transport, and, consequently, profit from them, is the poor state of 90 % of roads in Ukraine.

Almost 40 % of roads of national significance do not meet modern requirements for strength, and more than 51 % - for evenness.

The road structures are not in better conditions – only 46 % of 16.2 thousand road bridges and overpasses are in accordance to current standards, the rest are in an emergency or pre-emergency condition.

The reasons for such a critical state of road infrastructure - increase traffic flows and loads of them, as well as the serious underfunding of the road sector in during last 10 years.