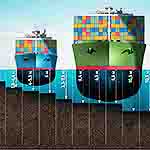 SE ‘Ukrainian Sea Ports Authorities’ (SE ‘USPA’) plans to spend about 1 billion UAH (USD 40 million) for dredging in the water areas of all Ukrainian ports in 2015, said in SE.

According to the plans, particularly, planned a reconstruction of sea approach channel with bringing depths up to 16 meters in port of Ilichevsk.

Port of Odessa is planned dredging with bringing depths up to 14 meters. Also, continue dredging the harbor of Yuzhny port.

The work is began at Belgorod-Dnestrovsky port - there is expected to achieve the maximum draft of 3.5 meters.

As for other ports, plans to work to maintain the operational depths.