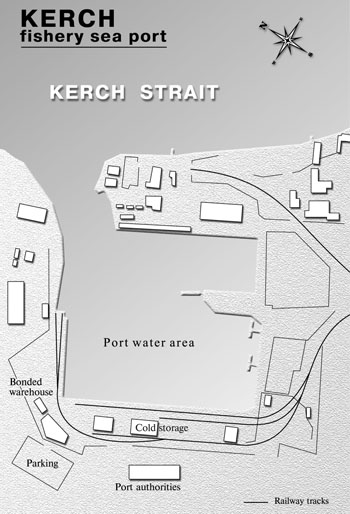 Kerch Fishery Port was founded on July 24, 1949. It was designed for handling fish products. Nowadays, it can also handle a wide range of bulk, general and bulk liquid cargoes, as well as perishable goods.

Kerch Fishery Port waters do not freeze over. It has a bucket type harbour, which provides safe shelter for vessels in any weather. Kerch Fishery Sea Port authorities are in charge of: the port water area itself; the approach channel's waters including the safety zone 100 m northwards and southwards of the channel's edges and the waters of the oil transfer facilities (100 m northwards and southwards of the oil facilities' pier).

All ship movements in the port and channel are prohibited when visibility is less than 0.5 mile.

Ship agents in international voyage must inform the port operator of her ETA. When cargo and readiness documents have been received, a pilot is sent to the vessel to provide pilotage and mooring at the appointed berth.

The ship agent must provide for the vessel's entry and departure clearance, as well as satisfy the master's request.

Tug assistance for entering/leaving Kerch Fishery Port and mooring operations is obligatory for vessels of 4,000 t and more. The port renders 2 tugs, Skif and Krab. The ship agent must submit request to the Port Operator 2 hours before tug assistance is required.

Repair services for navigational equipment and vessels are available in Kerch Fishery Port.

Ship agents, who service ships lying in Kerch Fishery Port can submit requests for all services in writing to the Port Operator; those anchored at sea can do so by radio. The port provides reception of garbage and oily waters (cleaning facility capacity: 800 cu. m). All vessels can be supplied with potable water.

Currently, however, petroleum products, liquefied gas and grain are the main type of cargo handled. A wide range of bulk, general and bulk liquid cargoes can also be handled, as well as perishable goods (meet, fish).

There is one cargo handling area in the port. All 5 berths are equipped with railroad access lines. There are 7 railway lines totally, with an overall length of 4,292.6 m. Razyezd 11th km Station services the port and is 1.5 km away. The port has the facility for (un)loading diesel fuel and vegetable oil.