The leaders of Odessa port cargo handling in February 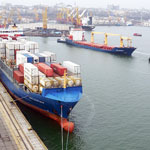 Three of seven stevedoring companies of Odessa port, specializing in transshipment of dry cargo (excluding containers), in February of this year have increased the volume of cargo handling compared to the same month of last year. It is reported by Press department of Odessa seaport.

The absolute leader in the number of tones processed and in the growth of the tonnage is ‘Brooklyn-Kiev’ LLC - operator of Grain harbor’s facilities (transshipment of grain in bulk, rolled steels, ore). The dockers of ‘Brooklyn-Kiev’ shipped 510.6 thousand tons of cargo on to the vessels in February 2015, which is almost by 100 thousand tones more than in the February 2014 (412.4 thousand tons).

‘Metalzyukreyn Corporation’ LLC closes the ‘top three’, completed in February with an impressive ‘plus’. They operate at piers 7-8 of Grocery waterfront (transshipment of steel products, ore, general cargos). Its result – 220. 9 thousand tons, which is higher by 85.5 thousand tons or 63.1 % than in 2014.

There are 4253.58 thousand tons of cargo have been handled at the quays of Odessa port in January - February 2015, which is by 4.2 % more than in the first two months of last year.