Dredging in Skadovsk, Berdyansk and Odessa significantly change the situation in the ports. The next step - Nikolaev, Kherson, Izmail and other 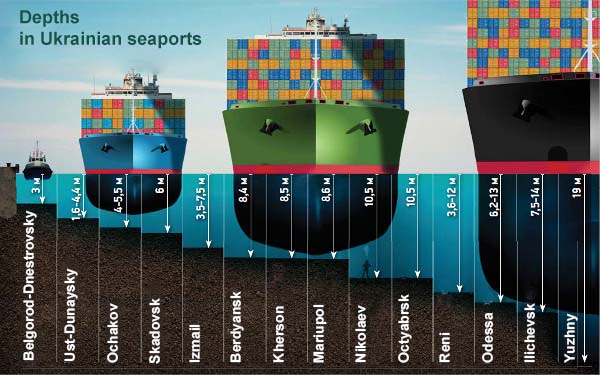 In autumn of 2014, intensified dredging was started in some ports of Ukraine. Such news have been provided by ports of Nikolaev, Kherson, Skadovsk, Ust-Danisk, Belgorod-Dnestrovsky, Reni, Izmail and port Octyabrsk.

The need to dredge in a number of seaports, SE ‘USPA’ explains, in particular, the growing fleet tonnage calling at Ukrainian ports, and the reorientation of cargos from the ports of Crimea to mainland ports of Ukraine. Handling activation is observed in small ports. Cargo traffic at Ismail and Berdyansk ports grew by more than 20 %, at Octyabrsk - more than 30 %, Ust-Danaisk port’s handling increased more than fourfold. Of course, in absolute terms, this increase cannot be compared with the performance of large ports. Nevertheless, in general, the trend is clear: adverse events that we are witnessing today in the country, gave impetus to the development of small ports.

Every port, which is wait for dredging, has their hopes and plans. Administration of Berdyansk sea port has long attracted the attention to the fact that the depth at the berths close to its critical point. But right now, the need for dredging is due to a significant increase of cargo handling volume, which is associated with the reorientation of the cargoes from Mariupol. So, in August 2014, turnover of Berdyansk sea port reached 390 thousand tons, and it was, at that time, a record monthly port’s output during its 184-year history. And in January-September 2014, Berdyansk handled 1.988 million tons of cargoes, increasing handling by 35.8 % compared to the same period of 2013.

Long complained about the lack of depth in. In order to load 3000 DWT vessels up to full-draft, port needs depth at least 3.8 meters. Now, because of the storms, the depth is about 3 meters, but a few years ago, exceed 4.5 meters. At this stage, it is deepening to 3.5 meters.

Belgorod-Dnestrovsky sea port specializes in transshipment of Ukrainian roundwood. In 2013 and earlier 2014 the volume of cargo handling fell here. This is due to the instability in demand in Turkey, which buys Ukrainian wood and logs. So, reaching 107.5 % of cargo handling comparing to 2013 during 10 months, Belgorod-Dnestrovsky port has only returned to the lost positions.

Awaiting for their turn Nikolayev, Kherson and Izmail ports - at least SE ‘USPA’ voiced the plans for carrying out the work in these ports. According to SE ‘USPA’, the port industry, in general, needs dredging volume of 20 million cubic meters. It needs a lot of money and changing of cumbersome legislative approval process of dredging.