Report of Minister of Infrastructure. How I spent first 80 days in minister’s chair 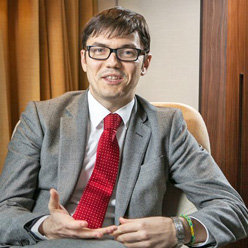 The main priorities: reducing the role of government in the state monopolies, the decentralization of functions of the ministry, corporatization of the budget forming companies and the abandonment of old appointees.

Among the most resonant proposals offered for experts’ discussion - Lviv Airport privatization, the introduction of toll roads and concessions in the seaports.

The main thesis of Minister.

Not enough to have good laws. New people must come to join the new management that will reform and make more effective ministry. Today announced three candidates for the post of director general of Ukrainian Railways (SE "Ukrzaliznytsya"). These people were chosen from more than 200 candidates. This top-managers of very large companies. It does not matter which of them will head the company as a result. Each of them can bring "Ukrzaliznytsya" (UZ) to a new level.

But we must understand that the role of general director in the process of corporatization of "Ukrzaliznytsya" will be changed. A supervisory board will be create, which will include the best European and Ukrainian experts of railway industry.

When we began the process of selecting new people in "UZ", we understood that there will be resistance. It began even before we announced the start of the process. While I’m Minister, there will be no unfair agreements, assigned to a particular post. Only transparent and competitive selection process.

‘UZ’ is in process of corporatization, which clearly established in law. It says that the railway paths cannot be privatized: they are state property that is transferred to a Stock Company "Ukrzaliznytsya" for the conduct of business activity. There is no concrete decision regarding the need for tolerance of private locomotives on the railways - will be discussed. Most experts say that the open competition in the locomotive segment is not necessary. As for the railway cars - the third of them are private today. In most countries, the same situation. There is no problem to make the market more competitive and transparent.

About update of the railway rolling fleet

The main question - how do we restore the wagons and locomotives. Today locomotive fleet is worn by 90%, cars - by 80%. I often say that ‘UZ’ must be headed by railwaymen. But during 24 year ‘UZ’ was leaded by professionals-railwaymen, and now the company brought to what is sometimes hard to find cars to carry grain since they fall apart.

We develop a 5-year plan of the rolling fleet recovery. I demand that this plan must carry the elements of production localization. Ukrainian enterprises are able to produce up to 90% of the cars elements. There are problems with localization in the locomotive segment. We cannot produce the desired quality electronics, and it will be imported. However, the 5-year plan will be putting into operation in nearest time. This will allow domestic producers of railway equipment to plan their investments and to start negotiations on the financing of working capital.

Taking in mind the economic situation in Ukraine, I am sure that without concession of roads, toll roads, we do not build anything new in the road sector. We will not be able to attract investment. I will give to the investors first draft of the concession road "Lviv - Krakovets" within 2-3 weeks.

We are currently conducting discussions with experts, how the system of toll roads should operate in Ukraine, and which model of Western countries could be applied in Ukraine.

We need to attract investment in the maritime industry to develop transport potential of Ukraine. To do this, we have to create the conditions for a public-private partnership. The Ministry plans to introduce a pilot project of such partnership in Yuzhny seaport. We will show to the market the first successful market public private partnership project. This requires changes in the legislation that did not work. It will prevent participation in the auction only one player. We will attempt to run such open process in other ports.

I would like to initiate another public debate. It concerns the privatization of state stevedoring companies. During my visit to Odessa, I was surprised when the representatives of all the unions asked me, "When do we start to consider the privatization of state stevedoring companies?" If there is a need for this, we will discuss it with all the players in the market.

The revival of river transport

I want to start another debate: who should own Lviv airport - municipality, state, private or quasi-private? Lviv Airport - is a unique point that will never be a hub, but which have a lot of money invested. It is located in the tourist heart of Western Ukraine and can be a magnet for tourists transportation.

I spent a lot of consultation with the expert community and the mayor of Lviv. All have the same point of view more or less. But, I would not want to ministry takes alone any definitive decisions. Therefore, we are ready to discuss this issue.

About the difficulties of "open skies"

I am ready to sign an agreement on "open skies" even tomorrow. The problem is due to Britain-Spain Gibraltar conflict. While he did not dare, I cannot sign. The President and the Prime Minister aware of the problem and recite it every time in discussions with European officials.