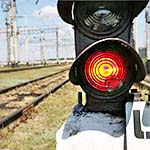 2014 was extremely difficult for the markets of railway, road and air transport freights. Nevertheless, it showed that only talk about that all is badly, dooms the market players to survive.

Yes, there are enough of "whiners", waiting for "weather" improvement. But now, it is about those who, despite the deepening crisis and undeclared war in Ukraine, are sated to earn.

Milestones of the year

The revolutionary changes in the segment of Ukrainian railway transport has not begun in 2014 year. In accordance with the decision of Cabinet of Ministers no. 200 dd 25.06.2014, already in 01.01.2015, on the basis of State Enterprise ‘Ukrzaliznytsia’ (UZ), would have to appear a public joint stock company with 100% state capital.

By the end of last summer, it had to be completed an inventory of ‘UZ’ property, and by the end of September - its independent assessment. But the conflict in Donbass forced to move reorganization of the industry to the next year. 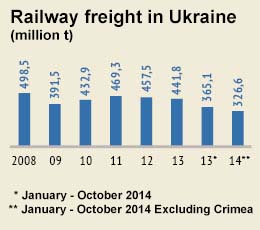 It is expected that PJSC will include 25 branches, integrating six regional railways and railway transport companies of public using, business entities of repair of traction and rolling stock, etc.

In the market of road cargo transportation, the main outcome of 2014 can be considered a reorientation of Ukrainian carriers to domestic market and EU market. This trend is due to the deterioration of relations with Russia and West's economic and financial sanctions relation to Russia.

As a result, this year the volume of traffic from Ukraine to Russia decreased by at least 50 %, and the Russian transit of goods from and in Europe – by 36 %. This - at first. Secondly, began to work the Association Agreement with EU and the preferential regime for Ukrainian exporters.

According to the Ukrainian State Statistics Service, in January - September 2014 domestic automobile enterprises in general carried about 121 million tons of cargo - 6.4 % more than in the same period in 2013. Turnover of goods decreased by 0.8 % and amounted to 25.5 billion tons/km.

However, things are not as rosy as it follows from the official reports. Seriously affected as small and medium-sized enterprises, who simply cannot afford to upgrade park of trucks, and large carriers focused on Russia and Central Asian countries, are not ready to adjust production to the standards of EU.

Port industry of Ukraine has also worked on a rapid reorientation of traffic flows caused by the annexation of the Crimean peninsula. Russian Federation ‘chop off’ from Ukraine and five commercial seaports - Sevastopol, Kerch, Theodosia, Yevpatoria and Yalta.

Despite the fact that their share in total port cargo turnover was relatively small (in 2013 - about 6.5 %), the loss was critical to the sea transshipment of grain in the face of growing grain export (in Crimea was centered about 10 % of transshipment of Ukrainian grain capacities).

The loss of the peninsula was painful and for Ukrainian exporters of steel: Sevastopol sea port was their backup port in case of congestion at Mariupol port.

In the case of deficit in oil market, an emergency supply of fuel oil was carried through Theodosia sea port (namely - through oil transshipment complex disposed therein). For example, 1 million tons of petroleum products have been imported through Theodosia in 2013.

The main attractive investment sphere of Ukrainian railways are freight transportation, which form profit ‘Ukrzaliznytsia’. Now rail transport, even with the pipelines, serving more than 50% of total cargo turnover.

In contrast to the cargo segment, the passenger rail transportation are unprofitable and financed by cross-subsidization from cargo transportation. However, parliament deputies want to proceed to the elimination of cross-subsidization in first quarter of 2015: it is planned to introduce a mechanism for compensation of losses from passenger traffic.

According to First Deputy General Director of 'Ukrzaliznytsia' Maxim Blanka, the railways should be given the opportunity to work in conditions of free competition, albeit with some restrictions, and stop the practice of complicated tariff.

In addition, Mr. Blanka insists on the soonest decision of the admission of private investors to the formation of freight locomotives fleet to support income-generating segment of the railway.

According to ‘Ukrzaliznytsia’, depreciation of traction park (1547 units) exceeds 90 %, with standard service life of 30 years. The average ‘age’ of electric locomotives is almost 37 years old. An urgent need to replace more than 500 electric locomotives.

The problem of fleet renewal concerns international road carriers as well. However, in contrast to the railway, they already have the prospects to earn in European direction.

According to Nikolai Zasulskogo - president of Kiev Chamber of Commerce, now about 70 % of exports to EU provided by agricultural products, 15 % - food products, and only 15 % - technological goods that are either previously worked for European market, or come to it recently.

Obviously, such a structure of demand in EU will continue in 2015. Although, according to Yuriy Koguta - chairman of Association to promote business cooperation between Ukraine and EU, European companies are interested in is technological products, and the ratio may change.

In any case, the Ukrainian international carriers will not remain without work. After all, European drivers will not come to Ukraine massively: they fear of the situation in country, bad roads and lousy service. In turn, domestic carriers will be looking for European customers and international logistics operators because they can contribute to search for ‘reverse’ cargo, that is the problem now. In addition to this long-term partnership with such operators eliminates the risks associated with fraud Ukrainian freight forwarders, which are often delayed payments and, in fact, are middlemen, resellers, assigns 30 % of the freight cost.

It is noteworthy that logistics operators now contribute to streamlining the internal market. For example, recently the company FM Logistic announced its intention to create a model of so-called contract logistics instead of existing supply scheme of pharmaceutical products through scattered distributors.

As for Ukrainian ports, the ‘gap’, which appeared after the Russian annexation, they were able to patch up quite well: the current reduction in turnover by 4 % (in January – October 2014, compared to the same period in 2013) due, rather, to general economic downturn in country.

Part of the Crimean freight traffic received by Mariupol seaport and handling mostly moved to Kherson, Nikolaev and ports of Big Odessa.

In general, the success of Ukrainian sea ports can be confirmed by the fact that, despite the current tough economic and political crisis, the interest in them by investors not waned.

For example, in Odessa port, a project of extension of the container terminal and two transshipment complexes are being completed. Under these projects attracted a total of about 4 billion USD of private investment. There are also successful projects in Yuzhny port (nearly 3 billion USD).

However, it should be recognized that Ukraine is gradually losing position of transit state in Black Sea region: the volume of transit cargo transshipped in ports in January - October 2014 decreased by 30 % compared to the same period of 2013. Until recent events, the cumulative share of the Ukrainian ports in handling in Azov-Black Sea basin reached 35 %.

According to Alexey Andreychenko - a senior analyst of investment group ‘Art Capital’, the future of the railway market, entirely due to the corporatization of ‘Ukrzaliznytsia’. Separation of business and management functions of this state monopoly will allow the company to enter increasingly to the global capital markets.

In present, the borrowing is performed by individual regional railways, since cash flows are too complex and opaque to foreign investors.

But Ukrainian road carrier, believe, already come out to Europe. But there are many problem here. Affected by the lack of proper drivers training and experience in working with foreign partners who pay attention not only on technology and qualified drivers, but also to ensure their work and leisure. Of course, such costs are not all carriers can afford. Therefore, the Association of International Road Carriers (ASMAP) started to develop a program of priority adaptation actions of all market participants (shippers, carriers, freight forwarders, logistics operators, and others.) in accordance with European rules of the game. For its implementation, according to Sergey Chaly - Director General of ‘KamAZtransservis’, the carriers intend to create a support group of people's deputies. It is about the development and adoption of relevant legislation and the elimination of regulatory barriers. In addition, entrepreneurs are going to create a protective barrier that will stimulate Ukrainian cargo owners to use the services of domestic carriers.

In order to enable our drivers did not look outsiders in Europe, market participants intend to organize training. Indeed, European legislation provides for more stringent liability for failure to comply with safety requirements and terms of delivery; and even those who do not know foreign languages, no leniency.

As for Ukrainian ports, the potential volume of traffic that may be involved in them, can reach 250 million tons. In particular, in 2015 is expected: to attract private investment for development of the strategic port infrastructure; implementation mechanism for the protection of investors' rights; preservation of state ownership of strategic port facilities, in particular, piers and other waterworks.

In December 2014, State Property Fund announced a competition for the selection of appraisers integral property of SE ‘Sea Commercial Port’ Yuzhny’ in order to transfer it to the concession. Note, port ‘Yuzhny’ - the largest of Ukrainian ports. The port handled more than 30% of the domestic maritime transshipment in January - October 2014. In addition, after the completion of the reconstruction of sea approach channel and inland approaches, ‘Yuzhny’ will be the deep-water port in Black Sea and can accommodate vessels with deadweight of 200 tones.

It could be predict with certainty that the concession contracts in Ukrainian seaports will be concluded in 2015. Accordingly, the port industry can count on attracting significant investments.