Ukraine intends to achieve the arrest of 69 vessels that visited the ports of Crimea after the official closing, and thereby violated the state border of Ukraine. This was announced by George Logvinsky - member of parliament.

"I applied in October 2014. It was opened proceedings against 69 ships that illegally entered into the occupied territory. One of them has come to Kherson in March and has been arrested" - said G.Logvinsky.

He noted that at the request of the Prosecutor General of Ukraine, inspection of the vessel was made, seized documents and compiled administrative report addressed to ship-owner and captain. The criminal proceedings was opened under Article 332, part 1 of the Criminal Code (violation of the order of entry into the temporarily occupied territory of Ukraine and out of), which provides the confiscation of the vessel and up to five years in prison.

As told G.Logvinsky - the ship came from Israel. The crew consists of 12 people.

"There will be confiscated all 69 vessels around the world, when we find them in the framework of international agreements. The total amount comes to about 800 million USD. But the most important thing for us - it is an opportunity to block violation of our borders. In accordance with the current resolution, we closed Crimean ports. There is a corresponding resolution of UN", - said G.Logvinsky.

As previously reported, the Court in Kiev, on 24-th of March, granted the petition of the investigator for the arrest of m/v ‘Kanton’ (flag Tuvalu), that visited a port of occupied Crimea. The vessel is detained.

According to Anatoly Matios - chief military prosecutor, it was found during the investigation that m/v ‘Kanton’ under flag of Tuvalu, illegally arrived to closed port of Sevastopol in July 2014, and in March of this year has come to Kherson seaport for loading. 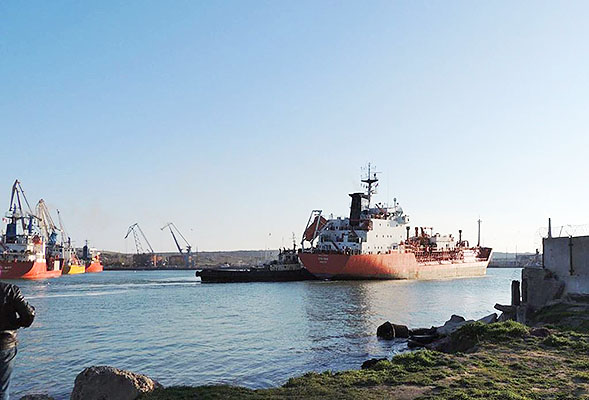