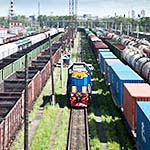 Loss of control over Crimea and part of Donetsk and Lugansk regions, partial destruction of the country's infrastructure, the economic crisis and the decline in industrial production by 11 % did not dramatically bring down rates of the transport industry of Ukraine in 2014.

Reduce of the volume of cargo transported in the country was not as significant as predicted by analysts. According to official statistics, the total turnover of commercial seaports in January - November 2014 decreased by only 3 % compared to the same period in 2013.

The volume of cargo transported by trucks is remained almost unchanged and the flow of goods, shipped along the rivers generally increased by 25.6 % compared with January - November 2013 - almost 5 million tons.

However, the performance of rail transport - pessimistic. Turnover of goods here, "dipped" by 12 %. This is due to the fact that most of the Donetsk railway is on the territory controlled by the rebels. It is predicted, that because of armed conflict and terrorist attacks on the railway, the railroad lost USD 3 billion by the end of 2014.

Most reduced volumes of rail transportation of coal (nearly 25% compared to January - November 2013). By the way, this figure is fully correlated with the reduction in coal production in Ukraine in last year, which, according to ‘State Statistics Service’ was 30.5% comparing with 2013.

However, the turnover of coal transshipment in Ukrainian sea ports looks completely different. According to preliminary information of SE ‘Ukrainian Sea Ports Authority’ (SE ‘USPA’), mainland sea ports (except Crimea) handled 12.4 million tons of coal during 2014, that is only by 400 tones less (or 3%) than in 2013. 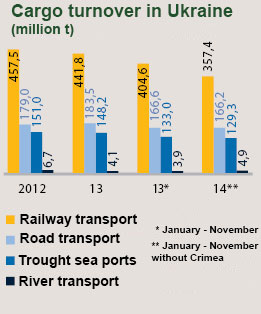 Coal handling decreased by only 6.5% even with handling of Crimea ports, which remained under control of Ukraine for only three months in 2014.

This, at first glance, a paradox has a logical explanation. Ukraine has always been a ‘net weight-exporter’ of coal and transit, and ports processed parties of coal that were in transit from Russia or shipped abroad by Ukrainian companies. The reduction of transit and export was offset by a significant increase in thermal coal imports from South Africa and Australia. Thus, Ukraine has become an coal importer instead of exporter.

In seaports, coal is processed mainly at the facilities for handling bulk cargo, which have total capacity of 67 million tons per year. This is quite enough for the changed structure of handling (for example, in 2013, "bulk" terminals were loaded onto 86%).

But for the most economical coal imports, in terms of logistics, is the use of ‘Capesize’ vessels, with deadweight of 150 tons. This implies that the depth of the port waters, in which coal is discharged, must be not less than 18 m.

A sufficient depth have only ports of Big Odessa, with capacity of 40 million tons per year. But possibility to discharge ‘Capesize’ vessels, directly at berths, has only Yuzhny sea port. However, its facilities are loaded up to 100% now - there are significant amounts of handling of iron ore and coke.

The first batch of coal from South Africa was discharged at the container terminal of Ilichevsk port. According to the ‘Center of Transport Policies’, the different types port facilities in Ukraine are interchangeable. Nevertheless, the cost of coal transshipment at unspecialized terminals are higher than at dedicated, due to a lower intensity of cargo operations, more time of vessels’ staying at berth and demurrage charges for it. For example, Ilichevsk port can discharge 15 thousand tons of coal per day. A specialized terminal of ‘TIS’ allows to discharge 30-35 thousand tones per day.

As the ‘engine of growth’ in the nomenclature of goods transported by railways and shipped through ports acts grain. This is not surprising, since, according to operational forecasts of Ministry of Agrarian Policy, Ukraine will export about 37 million tons of grain in 2014/15 marketing year (MG), which is 10% more than in the previous MG. For instance, the volume of grain transportation by railways, increased by 15.4% in last year compared to 2013.

But grain traders are faced with the problem of the inability of infrastructure to handle the increased flow of grain cargoes. Loss of control over Sevastopol port (Crimea), where the grain terminals of PE ‘Avlita’ are located (the port handled nearly 1.5 million tons of grain in 2013), has forced shippers to redirect cargo flows to Black Sea ports of Odessa, Nikolaev and Kherson regions. These ports have a good reserve of capacity and generally cope with the grown grain transshipment, but on access roads to them are constantly emerging ‘plugs’.

According to experts, Ukraine is required logistics channels, designed to carry additional 10 million tons of grain per year.

And the grain traders have decided to create their own channels, arranging transportation by river transport. This, among other things, caused a sharp increase in river traffic in 2014 - more than a quarter compared to 2013.

However, the companies did not stop there. For example, ‘Nibulon’ Ltd (already has seven terminals on Dnieper river and one on Yuzhny Bug river, 28 non-propelled vessels with a total deadweight of 131 tons, nine tugs, floating crane and dredge) has completed the first phase of construction of river grain transshipment terminal in Zaporozhie region in January 2015, and at the end of 2014 - the construction of cargo berth. The design capacity of the new terminal is about 450 thousand tons of grain per year.

At the same time, river transportation of grain began to lose to transportation by rail. Problems - lack of vessels, freight price increase, exchange rate fluctuations and reduced banks’ financing. Meanwhile, according to the calculations of Ministry of Infrastructure, 5 liters of fuel equal to 1 ton of transported by river transport cargo to the distance of 500 km, by railways - 333 km, by road - only 100 km. In this regard, grain traders considering building or buying their own river fleet.

Metallurgists’ logistic flows have changed dramatically in recent months as well. Now, they are urgently looking for new routes for delivery of raw materials and completed products as well as engaged in repair of broken bridges and railways.

The first hit was inflicted on coke plants, placed mainly in the area of anti-terrorist operations. The destruction of the railway infrastructure made it impossible to supply coking coal, which in turn led to a reduction in the production of metallurgical coke and a temporary halt of some enterprises.

In December 2014 was blown up the railway bridge over Kalchik River in Mariupol, that was important to ensure the supply metallurgical enterprises with raw materials and delivery of complete products to Mariupol port. After that, the raw material delivered by trucks.

It is hard to work without railway link to Mariupol port. The recovery of railway bridge will take three - five months. In the meantime, while the bridge is being restored, metallurgists built bypass single-track railway line length of 1.1 km.

As a result, if the earlier cost of transporting raw materials in the cost of Ukrainian steelmakers production did not exceed 2-3%, but now this figure could rise by a few percentage points.

Finally lick the financial condition of the domestic steelmakers can SE ‘Ukrzaliznytsia’, announced its intention to raise tariffs for the carriage of goods by rail by 30%.

It should noted that the echo of the war - is not the only reason for the change of logistic routes of Ukrainian industrialists. Metallurgists actively began to use river transportation improving their logistics.

So, iron and steel works ‘Zaporizhstal’ resumed cooperation with Zaporozhye river port in September 2012 and significantly increased the transportation of its products through Dnieper River during a few years. As a result, it were transported about 500 tons of steel through the river port of Zaporozhye in 2013, and more than 700 tons in 2014.

Achieve a substantial effect in the transshipment was possible thanks to cabotage. Small consignment transported from Zaporozhye river port to Kherson sea port on river barges, and then reloaded on to larger ‘river-sea’ type vessels at Kherson.

As a result, the delivery time of steel to customers were able to reduce by an average of 15 days, which would increase the competitiveness of products ‘Zaporizhstal’.